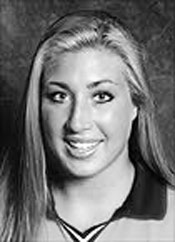 Eve Rackham Watt stepped on to the court for the first time ever as a head coach at Thompson Boling Arena in 2018 for the Tennessee Classic. Her UT squad would win all three matches that weekend. But that wasn’t her first experience with a Rocky Top tournament. Almost two decades before that first one, she actually stepped on to another court here in Knoxville for what was then called the Lady Vol Classic… as a player.

Rackham was a freshman setter at North Carolina in 1999. That season, she had played in every match, was named the ACC Rookie of the Week four times, and led the team in aces and assists. The Tar Heels, predicated to finish fifth in the conference, had won the ACC Tournament, gone 28-6 and advanced to the second round of the NCAA Tournament.

So expectations were high for the sophomore and her team in 2000. UNC won their first four matches, only dropping a single set. Up next was the Lady Vol Classic.

Tennessee, too, had some high expectations. After only two winning seasons in nine years, UT had had back to back 19-win seasons coming into 2000. And they were also undefeated after their first matches of the year.

UT jumped out to a 5-0 lead in the first set. Rackham put up the assist that finally got her team on the board. The Lady Vols took an 8-1 advantage, but UNC won the next three points. The last, assisted by Rackham, forced a Tennessee timeout. UT came out strong afterwards and, despite five total assists and a point won on a Rackham serve, Tennessee won seven of the next ten points for a 15-7 first set victory. 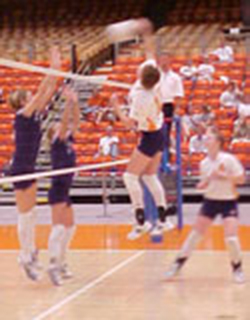 In the second set it was the Tar Heels who took a quick lead, going ahead 9-1. Rackham already had seven assists and two blocks in the set before Tennessee scored their second point. Leading 10-3, but without the serve, Rackham went on a tear. She put down her first kill of the match. A service error gave UT the serve, but Rackham took it right back with another kill. This time they took advantage and Rackham got the next point with a block. Down 11-3, the Lady Vols mounted a comeback effort, winning half the last eight points, but it was too little too late. Rackham added two more kills and assisted with another giving North Carolina three of the four points it needed to take the second set 15-7.

The third set started similarly to the last with UNC up 4-1, and Rackham putting up seven assists before Tennessee scored their second point. From there, each team doubled their score at 8-4, with Rackham almost doubling her assists in the set with six more. That pace continued for the rest of the match with the Tar Heels basically averaging two points for every Lady Vol point. UNC won the third set 15-8, helped along by 18 assists by Rackham.

The fourth set was much more competitive. There were six sideouts (including a Rackham kill) to start the match before an ace from Carolina scored the first point of the set. From there the teams went back and forth with ties in between, at 2-2, 4-4, and 6-6. Rackham so far had three kills and three assists in the match. Then the Lady Vols finally gave the home crowd of 369 people something to cheer about for the first time since the first set… kinda. UT got four points in a row without any intervening sideouts to take a 10-6 lead. However, three of the points came on UNC attacks errors (the other was a UT block). Rackham, who had been subbed out around the 4-4 mark, came back in and soon enough North Carolina had clawed the game back to an 11-11 tie. After five sideouts, including a Rackham kill and an assist that stopped UT scoring attempts, the Lady Vols finally broke the tie. With another point, UT took a 13-11 lead, two points away from forcing a fifth set. Unfortunately for the Tennessee fans, that would be the last score of the night. Starting with a Rackham assist to win back the serve, UNC would go on to win the next four points in a row without UT getting a single sideout. The Tar Heels took the set 15-13, and the match 3-1, giving Tennessee their first loss of the year.

Rackham finished the match vs the Lady Vols with 8 kills (a then career high) on 11 attacks for a .545 hitting percentage, 42 assists, 10 digs, and 4 blocks. She was just two more kills away from what would have been her first triple double (a feat she’d accomplish during her junior year). For the two matches she played in the tournament she had 12 kills, 80 assists, 16 digs, and 6 blocks.

Tennessee would go on to have a great season, finishing the year 23-10. It was their first 20-win season in over a decade, and they earned their first NCAA Tournament bid in seven years. North Carolina went on to big things as well, with a 26-8 record, the ACC Tournament Championship, and an NCAA Tournament invite.

21 years later, Rackham is about to step onto a court here in Knoxville for another Tennessee Classic… which will again include a team from Texas, a team from North Carolina, and a southern Division I-AA school just a few hours drive from here. She’s come a long way from that sophomore setter who played at Stokely Athletic Center at the turn of the century. So as you’re watching the matches this weekend, keep in mind you might be watching a Lady Vol coach of the future — and she might not be wearing orange and white yet.