Lady Vol Madison Coulter played her last match during the fall portion of the 2020 season. But until about a week before her Senior Night back in November, I didn’t know she was leaving early. So I wasn’t prepared! Time to make up for that now. Here’s a quick look back at Coulter’s time wearing the orange and white, in some amazing stats, some potentially embarrassing old photos, and some quotes from her signing back in 2017.

• Coulter on choosing Tennessee: “I’ve grown up loving Tennessee and being proud of the state I live in. I am beyond fortunate to say that I get to represent the great state that raised me. As a little girl, I never missed a football or Lady Vol basketball game, and to know that my childhood dreams are coming to fruition is really something special.”

• Then head coach Rob Patrick: “We’re excited to have such a talented homegrown player join our program. Madison is a very skilled player as her back row skills are advanced as her attacking skills at the net. She will be looking to compete as a six-row rotation right side/outside position.”

• Former coach Angel Babelay: “To watch her do what she’s always wanted to do and reach her goal is awesome to see as a coach. I can remember her coming off the bus when she was in second or third grade and coming into the gym and wanting to pass and play. She’d just hang out with us and sometimes jump in there during drills. That’s what it’s all about. Getting them started young and seeing how fun volleyball is and seeing them set goals and succeed.”

• Coulter on her new teammates and goals: “I love all the girls and I’m excited that I get to play with such incredible people. It’s exciting to be part of such a great class… I want to bring leadership and a way for people to laugh and not take things so seriously, but in a way that will still take us to the goal of winning.”

While she didn’t play the spring portion of the schedule, Madison Coulter was an important part of the team this season. In fact, until last week, despite not having played since November she was still the SEC leader in digs per set! But she wan’t just an asset this year, she’s been a big part of the team’s success throughout her Lady Vol career.

She started off as an outside hitter her freshman year. She had 118 kills and 37 blocks. But even then her defensive skills were on display. She dug up 193 balls, third best on the team behind only the libero and the setter. She notched 3 double-doubles that year. Coulter had a 21 dig performance vs Texas A&M, a phenomenal number for a freshman playing an offensive role on the team at the time — and her first of many times reaching that milestone.

in 2018 she moved to libero, a position she had never previously played — and became a defensive star for Tennessee! Her sophomore digs total of 369 and her 3.58 digs per set are both the 19th most in school history. She topped those numbers her junior year with the 11th most digs in school history at 429 and the 9th best digs per set average with 3.97.

One of the highlights of her career has to be her helping lead the team to a 26-6 overall record and 16-2 record in conference in 2018 — in her first season at a new position. The team with a first-time libero, who the year before finished 11th in the league, fell just one game short of an SEC Championship! UT earned its first NCAA Tournament berth since 2012. In their first round match, after falling into a 0-2 hole, the team came roaring back to win the next three sets and advance. Coulter put up 29 digs in the effort, breaking the school record for digs in an NCAA Tournament match that had been set back in 1993.

Coulter had 14 matches in her career where she reached 21 or more digs. Her career high of 35 digs ranks as the 9th best in UT history. She’s one of only eight Lady Vols to ever reach 30 digs in a match. And she’s one of just three UT players all-time to have had 12 matches with 23+ digs.

I can say without much hyperbole that Madison Coulter has been almost criminally under-appreciated when it has come time to hand out awards. Like Coulter, four other Lady Vols had 14 or more matches in their careers where they reached at least 21 digs. One (from the side-out scoring era before 2001) was named All-SEC. The other three (from the rally-scoring era since 2001) were all AVCA All-America Honorable Mentions and all won multiple SEC Defensive Player of the Week awards. Two were named SEC Defensive Player of the Year. How many All-SEC, AVCA All-America, All-Region, or Defensive Player of the Week awards did Coulter win during her time on Rocky Top?

In fact her ONLY playing award in four years was being named to the 2019 Tennessee Classic All-Tournament Team.

While her trophy count may be few, her accomplishments on the court and the memories she has left for Tennessee fans are many. Huge thanks to the local girl who stuck around to play for her hometown school. You’ve been a Lady Vol fan since you were young, and now you’ll be a Lady Vol For Life. And through your talent and your willingness to make difficult changes that were best for your team, you’ve set an example for all the other future Lady Vols to come. 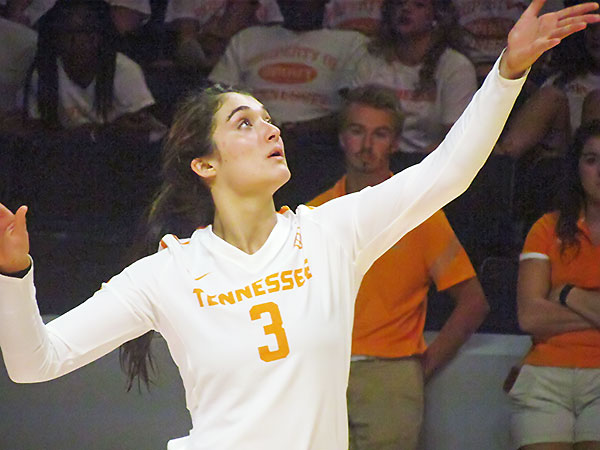