Lady Vol nation got some sad news today with the passing of former head coach Bud Fields. He was 87 years old. Fields was a highly respected and honored part of the local and national volleyball scene for decades. He still made the trek to matches as recently as last season, and I’m sure we’ll all miss seeing him down there in the front row this coming year.

You can find more from the university website, the local newspaper, and his obituary. 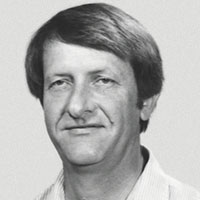 Bud Fields has been a fixture of Knoxville volleyball since the 1950s. He played on and coached YMCA teams for over a decade, earning multiple All-Southern honors. He helped bring the national championship to Knoxville twice. In 1971, USA Volleyball honored him with their Leader In Volleyball Award. He founded the University of Tennessee men’s club team and coached it for almost two decades. In 1977, he was named head coach of the women’s varsity squad.

UT hosted the first women’s volleyball event using the “SEC” label in 1977. Six teams competed, with Fields’ squad taking 2nd place. At the state championship, the Lady Vols went undefeated to claim the title. UT has incomplete data but has it as a 7-11-3 record his first season. (I have more, but still incomplete, data on 1977 and list it as 18-19-5). In 1978, Tennessee went 20-14-3 and came in 2nd at the state tournament.

Despite the fact that he “would like very much” to have continued as coach, Fields was replaced when the administration decided to move the women’s volleyball head coaching job from a part-time to a full-time position — Fields didn’t want to give up coaching the men’s club team he’d long been involved with. He continued to coach them for a few more years. They won several regional championships and placed as high as 9th in the country.

He was an official photographer for USA Volleyball for over two decades. Fields was honored with the Frier Award in 1997, the highest honor USA Volleyball can bestow. Again in 2000 they recognized him with the Kennedy/Johnson Heritage Award for his contribution in preserving volleyball archives. In 2003, he was inducted into both the YMCA Hall of Fame and the Knoxville Sports Hall of Fame. In 2011, he was named to the Lady Volunteer Hall of Fame. Two men’s club tournaments at UT are named for him.